The Bizarre Magic Show performed on this volume is not for every audience as its themes are dark, somewhat disturbing, and sometimes even bloody.

However, in the right venue and for the right audience, these pieces can be some of the most memorable magic you’ll every perform for any audience. And, though the central theme is material that’s really only suitable for adults and teen audiences, there’s a wide variety of plots and methods in play that will interest magicians of all types.

After a somber introduction, Dan begins the show with “Book of Blood,” an ingenious use of an ancient principle that really sets the mood for what the audience is about to experience.

Harlan then performs “Needle Thru Arm” with props that you’ll later learn how to make yourself. The performance, however, is definitely not for the squeamish!

“Psychotic Surgery” concludes the first trio of effects and while this demonstration is not what it sounds like (that comes later in the show…!), it is an astounding version of the Torn and Restored Card that will leave your spectator with an amazing souvenir.

Harlan gets even darker in the middle set as he begins with “Deviled Egg,” a demonstration that purports to cleanse a spectator of werewolf’s blood with ample, gooey evidence at the effect’s conclusion to support the claim.

Then, Dan weaves a story of a card game between God and the devil with the prize the soul of an audience member. To close out this portion of the show, Harlan turns to another classic as he apparently swallows and then threads five sharp razor blades in a piece he calls “Sharp Taste.”

As he begins the final segment of the show, Dan weaves a story of birth, death and rebirth in “Baby Balloon” in which an inflated balloon is burst and then, is not only restored but re-inflated! “Psychic Surgery” is a bloody and compelling demonstration of the techniques of purported psychic surgeons in remote lands who are able to remove malignant parts of the human body without using conventional instruments. Harlan’s hands are clearly seen entering the abdomen of an audience volunteer as he removes various pieces of viscera – a gory and potent reminder of how easily we can be fooled.

The show concludes with Dan reciting the classic poem by Mary Howitt, “The Spider and the Fly,” and illustrating the age-old story that cautions us against succumbing to the charms of flattery with a solid ring and a length of rope. This very theatrical piece leaves the audience with a lasting memory and a sense that what they’ve just seen in this show is much more profound than just someone demonstrating things from their bag of tricks.

Enjoy the show, then prepare to learn the secrets of a master as every nuance is revealed. Soon, you too will Pack Small, and Play Big! 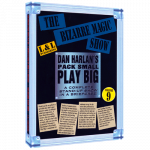