The card trick popularly known as Chicago Opener had its origins in an effect invented by Al Leech that was originally called Hot Card Trick No. 1 and then later rechristened Red Hot Mama.

The trick became immensely popular and many working performers immediately added it to their repertoires, notably Frank Everhart and Jim Ryan, who each sometimes get credit for its invention (Everhart’s version was published in a Frank Garcia Book as Chicago Opener and Ryan’s as Red Hot Mama in a book on Ryan’s magic by Phil Wilmarth.)

Despite its muddled origins, it remains one of card magic’s rare effects – an astounding miracle that is relatively easy to perform.

What the audience sees is that the magician causes a freely-selected card to change its back color (say from blue to red), which is then tabled. The performer then claims to be able to repeat the effect and a second card is selected. This second attempt fails – no second red card is found – but the performer makes good by turning over the first red card and showing that it has now magically changed into the second selection.

On this download, you’ll meet a number of world-class performers with their own unique takes on this wonderful piece of card conjuring. Bill Malone is first with a mentalism presentation for this classic while Michael Close adds his own very funny – and amazing – presentation, complete with a very original method. Michael Ammar presents two handlings for his signature version of Red Hot Mama. He also performs and teaches the traditional handling, as does Daryl Easton who also adds some important finesses. Finally, Dan Fleshman adds a powerful Card to Wallet kicker to this already spectacular trick.

There’s a reason that this effect has been a part of most professional card magicians’ repertoires ever since its first publication in 1950 – it’s a killer trick.

So, whether you call it Red Hot Mama or Chicago Opener, if you’re a magician who aspires to entertain with a deck of cards, you need to learn this trick – and you’ll find no better resource than the performances and explanations on this download.

The Dumbest Casino in the World – Michael Close

Momma in My Wallet – Dan Fleshman 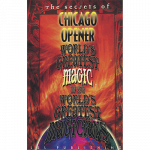