Tommy Wonder was one of the world’s finest performers and magical thinkers, and this video captures some of his best close-up work when he presented his lecture at the British Close-Up Magic Symposium. Shot with two broadcast cameras. A must for any magician!

Tommy performs and then explains in detail the following effects:

Thanks to Paul Harris – Tommy’s handling of the classic Paul Harris single torn and restored card in which the fourth piece appears to restore as well!

Lighter to Matchbox – One of the most visual table-hopping intro tricks. A Bic lighter instantly changes to a box of matches!

The Shrinking Box – Two versions of the shrinking card case. Very practical construction, easy to use.

Ambitious Card Routine – A clean and effective version leading to Card to Box, in which the signed card ends up folded inside a miniature hinged box on the table.

Squeeze – the brilliant illusion of a full deck being visibly squeezed into a tiny card box.

Deck Switch – Psychologically strong and easy to do.

Tommy also provides advice on performing close-up magic. He shares his thoughts on timing, misdirection,presentation and a whole host of other aspects of the magical art – truly fascinating! 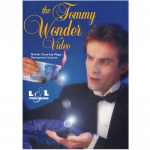