The Most Visual, Instant, in-the-hands Triumph effect on the Planet!

A new video release by Dani DaOrtiz! In this video download, he talks about technique, ideas, subtleties and all the theory regarding one of his most representative tricks.

The basic effect is that the deck is comprised of face-up and face-down cards. The spectator’s card is placed in the deck. Within moments, the deck is now shown to comprise all face-up cards, with one card being face down. Amazingly, that card proves to be the spectator’s select card!

Download the video, and learn to perform Open Triumph! 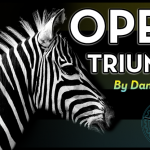