The Vault Babel by Chris Philpott

Babel
You give a spectator the ability to read a foreign language!

One Monkey Ahead
A diabolical twist on a classic method!

“I love this! I’ve used the 100th Monkey on TV to great success. There’s so much that can be done with it! I look forward to using these effects in my repertoire in the future.”
– Cyril

“Fantastic! The one-ahead envelope ploy is very, very, very, very (did I say very?) ingenious. Lovely. Your work stands on itself and when that happens, rare…”
– Banachek

This download set contains instructional video, gimmicked post cards, gimmicked envelopes, a PDF of written instructions, and over 400 JPEGs of gimmicked artworks that you can print at home in a variety of sizes.

You DON’T need the original 100th Monkey to perform these effects.

Babel: your spectators can read words in one or several of these languages: Spanish, French, Greek, German, Italian, Russian, Danish, Filipino, Finnish and Swahili! The performer can ask someone to pull up Google Translate on their phone to verify the results, use a translation dictionary, or ask people in the audience who speak that language. Xenoglossia (the ability to suddenly speak or read foreign languages) is an ancient miracle that even today is considered by the Catholic Church a proof of sainthood or demonic possession.

One Monkey Ahead: a potentially game-changing take on the one-ahead principle that allows the performer to put their impressions in a clearly-labeled envelope, put it aside and never touch it again! There is a wide-array of variations including Mental Epic and 4th Dimensional Telepathy-style routines, two and three-word variations and envelope-less versions where the words are written on the back of labeled cards. Super clean and powerful mentalism!

Person, Place and Thing. And Monkey: The performer shows a set of labeled pictures, each with different place on them (Germany, Suburbs, Forest, College…). The spectator secretly chooses one and is asked to imagine that they are in that location and some object is in front of them. The performer describes an astral projection journey to this place which he not only describes in detail – but actually names the object the spectator is thinking of! (No fishing, nothing written down and no pre-show).

PLUS there’s a bonus effect for people who register for updates: The Murderous Monkey! The performer lays out ten cards with the words “Pick your poison” on the back. A spectator chooses one of the cards. The others are turned over to reveal each has the name of a different lethal poison. The spectator’s card is turned over to reveal it has the word “Cupcake” printed on it!

“Chris Philpott has done something rather remarkable, first with Hundredth Monkey and now with Babel: he has created a new methodological principle! These effects are astoundingly good, and the method allows you complete freedom and flexibility to focus on presentation. I am an enormous fan of this genre of effects and I look forward to all his latest developments.”
– Joshua Jay

“I was lucky to test these wonderful tools before release and they are absolutely ingenious! Working on a cruise ship, I tried Babel with people from different countries – they were so entertained that the passengers kept on talking about it all week! But my favorite is One Monkey Ahead: it opens so many possibilities that it makes you crazy! This is something that will change the way you perform this classic method forever! If you want to add strong routines that pack incredibly flat and play huge, this is the way to go!”
– Luca Volpe

“The 100th Monkey Principle as a method is so unique. It feels like gateway to a whole new world of mental effects. It’s been a while since I felt this excited about a method for mentalism.”
– Ran Pink

“The 100th Monkey is not just a method; it’s an adventure! You’re going to want to run with these simian secrets.”
– Max Maven

Note: these are English-language effects – they are not designed to give non-English speakers the ability to speak English. And, while you can print any of the 400-plus cards in this set at home or at a print shop, this set does not include the ability to customize your own cards. 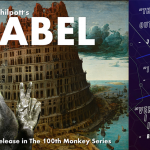