The Impromptu Miracles of Bob Read

Bob Read…At His Best! Bob Read was a truly rare combination: a consummately-skilled magician as well as an incredibly funny and commercial entertainer.

Now, for the first time on download, you’ll be able to see that everything you’ve ever heard about Bob Read is true…and then some. What’s more, on this exclusive release, there’s over 30 minutes of footage that has never seen the light of day…until now. This is Bob Read in his prime – digitally restored from the original raw footage (originally released by Videonics).

All of his classics – the material that made Bob such a revered personage in the estimation of just about every top magician in the world – are here.

The amazing Bottle Production, his hilarious Knife Through Coat, the jaw-dropping Transpo Tumbler and lots more- it’s all here. Even more amazing is the fact that a good number of these effects can be done with borrowed props! After the performance in front of a live audience, you’ll be treated to one of the most thorough expositions ever filmed as Bob walks you through not only the methods but also the history, subtle nuances, fine details and bits of business that made these tricks such reputation-makers for him.

The material on this download is Bob Read’s legacy to the magic community – captured forever and enabling future generations to be inspired and taught by a master. 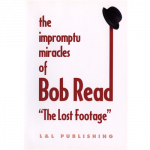 The Impromptu Miracles of Bob Read “The Lost Footage” by L and L Publishing – video DOWNLOAD
$34.95