Over twenty years ago Matthew Wright witnessed what he says was the greatest magic trick he has ever seen. Sat in a dark hotel lobby in Amsterdam his mentor, Eugene Burger, performed the Haunted Deck… a trick Eugene had spent a lifetime learning and it blew Matthew away.

Now, Matthew has decided to share what he has learnt about the effect 2 decades later.

For those who have never studied the original Al Baker “pack that cuts itself” this is a must watch. A true classic of magic.

Matthew has added some of his own twists to the original and also pays homage to Eugene and the techniques he mastered.

An effect that can be learnt in a moment….but mastered in a lifetime. 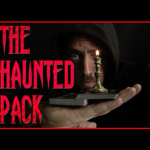