Dribble Aces
You dribble through the deck and ask four different spectators to call stop as you do this is an amazing open handling of the spectator cuts to the four aces.

Dillweed Aces
This is a beautiful revelation of the four aces that is visual and makes you feel a little bit of Nirvana.

Packet Cut Aces
Based on Eddie Fechter’s amazing packet force this is discovery will have people wondering if you made a pact with the devil.

Deal With It Aces
A coincidence effect inspired by father Cyprian that has a final “in the hands” revelation that will leave them stunned.

Cockroach Aces
This is eye candy. An Ace production that looks like magic.

Flippant Aces
A beautiful visual routine inspired by the great Master Earnest Earick that utilizes the famous Flippant move in an interesting way. 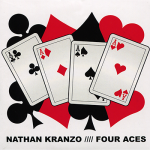