The very puzzling and entertaining con game known as the Endless Chain has its roots in an old Gypsy swindle from the 1500s called “Pricking the Garter.”

It was subsequently adopted by magicians in the 1800s and has been used to delight, captivate – and humorously frustrate – audiences to this day.

In this video, you’ll meet three different performers who each take a turn at demonstrating this classic scam.

Audiences are enchanted by tales of con men and swindlers and with the help of the world-class performers featured here, you’ll be able to add a routine to your show that is not only inherently interesting but is something that your spectators are unlikely to have ever seen before. 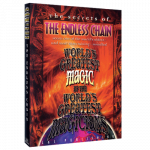