The Doctor Is In – The New Coin Magic of Dr. Sawa Vol 1 video DOWNLOAD

The Professor, Dai Vernon, summed up Dr. Sawa this way:

“One of the most creative magicians I have ever known. As the saying goes, you have to see it to believe it-and even then, you won’t!”

When Dr. Sawa burst onto the magic scene back in the 1970s, he caused an international sensation. His work with paper, seashells, ropes and especially coins, was simultaneously whimsical and astonishing. Some years ago, for private reasons, Dr. Sawa vanished from the magic world.

Happily, he has resurfaced-his enthusiasm for magic not only renewed, but actually increased.

1. See-Through Pendant: A solid silver dollar, worn on a chain, transforms into a cut-out coin. Through a devilishly clever method, you end clean.
2. Silvers: Four silver dollars immediately change into four assorted denominations, and then return to their original form.
3. Mr. Feather-Light: Here’s something you haven’t seen before. Imagine an “Oil & Water” routine using coins-with an amazing Coins Across conclusion.
4. Submarine Coins: When rubbed against the close-up mat, coins invisibly move from one hand to the other in poetic fashion.
5. A Hand Slit: One by one, four large coins penetrate through the performer’s hand, with a whimsical presentation.
6. Head & Tail: Six coins are used. Instantly, five of them vanish, then the remaining coin also disappears-and then they’re all reproduced.
7. Cheers in Bretagne!: A charming “wedding ritual” using eight silver dollars and a champagne glass. Mystifyingly, the dollars merge into a single coin.
8. Pushman: A Sawa classic revised. Twelve coins are pushed into a standard-size Okito Box. Then, literally dozens of coins are produced from the box. And there’s an eye-popping climax that delivers gasps!

Be the first to review “The Doctor Is In – The New Coin Magic of Dr. Sawa Vol 1 video DOWNLOAD” Cancel reply 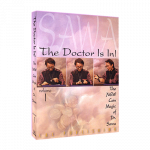