The Castle Routine by Ed Ellis

For over 25 years, Ed Ellis has performed close-up magic, sleight of hand illusions, and full time table magic for Hollywood, TV, and sports celebrities. His is also an accomplished award winning drummer, and has played on stage with The Buddy Rich Band.

Ed has also performed his amazing close-up illusions at Las Vegas’ Caesar’s Place, lectured at the world famous Magic Castle in Hollywood, and in 2005 was the star of the Ed Ellis TV show.

So sit back, relax and enjoy this amazing Download presentation, and see for yourself why many refer to Ed Ellis as the “World’s Fastest Hands”.

“Ed’s sleight of hand is simply AMAZING! He is a master of the art.”

Be the first to review “The Castle Routine by Ed Ellis – VOL.5 video DOWNLOAD” Cancel reply 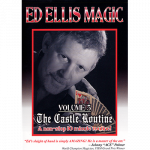