Three incredible HD videos available in one download now! All of the videos contain worker effects straight out of the repertoires of three of Cape Town’s most accomplished magicians. Real-world street magic effects that you will use! Taught in full HD with live performances included.

In this exciting new HD download series, Colin Underwood shares his handlings on some of the classic effects in magic. These are worker effects that have been audience tested and refined through years of performing.

Signed Card to Box – Colin’s version of the signed card to clear box…with an ungimmicked box!

Torn and Restored Card – A smooth and justified handling of this classic effect.

In this electrifying new HD download series, Magic Man (Andrew Eland) shares two of his favorite rubber band routines. These are two real-world routines that he has been performing for over 20 years – refined and tweaked through thousands of performances in every environment possible!

These are real world, in-the-trenches routines that have been audience tested and perfected!

Jacques Le Sueur is the only magician to have stolen South African President Nelson Mandela’s watch… twice! Now it is your turn to learn his unique technique for stealing a watch!

# Learn Jacques’ technique (known as one of the fastest & smoothest)

# Variations on how to reveal the watch

“Colin is an energetic innovator of comedy and magic with a wealth of experience and a sharp sense of humor!”

Download the video and start learning from these pros! 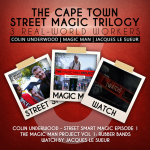