A COMPLETE eight minute stand-up comedy routine from Paul Romhany & Wayne Rogers. If you are looking for a hilarious routine that is innovative, original and funny then look no further. The book goes in to detail on how to make all the props needed for this hilarious routine. Created by Wayne Rogers for his own professional act, and used by Paul Romhany on cruise ships this routine has everything that makes it a strong commercial effect.

Effect: A card is signed by a spectator and placed inside the deck. The performer picks up a brown string shopping bag and has the spectator drop the cards in to it. He then explains that he has seen other magicians throw cards in the air and catch a card on the end of sword. Unfortunately the magician doesn’t have a gleaming sword, so instead bring out a thick wooden stake, which is banged on the floor. One end of the stake has been sharpened to a point. The cards in the bag are given a shake. The spectator names their card and the performer thrusts the stake down in to the open paper bag with such force that it penetrates right through the bottom.

The stake is pulled back out, and impaled on it is a card. Due to the large size of the stake, only a narrow boarder of card remains. The performer pulls the remains of the card off the stake, holds the empty frame towards the audience and proudly announces the name of the chosen card! After the laughter comes the climax where the performer taps the side of the stake and out of the blunt end he shakes out the chosen and signed card minus it’s border!! He shows it to the spectator who confirms it is their signed card and applause follows. 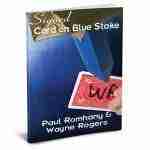