The mentalist shows some Alphabet flash cards to the Participants. The cards are mixed and distributed. The Participants are asked to form a word using the letter they have received, from which the Mentalist will be able to divine all of them.

Each participant exchanges cards after they were mixed and distributed, and yet the Mentalist is able to identify which cards were exchanged and which Participants they belong to.

“So clever and novel. A wondrous effect and concept. 3 cheers”
– Marc Salem 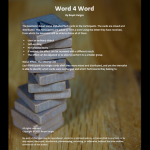