The Four Mystery Presents: Remote Viewing is a two-phase four-card mentalism routine. It enables you to see the locations of four cards through your participant even after the cards are mixed.

This effect uses a newly developed method that enables you to have the participant mix the cards and yet, the Mentalist is still able to determine and control the possible outcomes.

“4CS deal is great as there are some genuine free choices by the spectator in there which adds to the deception. Its slightly procedural, but I think can work especially well over Zoom as virtual performances lend themselves to a little more guidance/direction – but again those moments of freedom make it all feel very fair. It’s a nice way to have them mix cards on their end, hands off, yet you are still ultimately in control.”
– David Jonathan

“Absolutely brilliant! I studied it thoroughly and immediately proposed it several times in close up with such amazing results that I am planning to put it in a stage show. I think the results will be outstanding!””
– Renzo Grosso 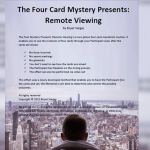