For many, many years now, magicians have been weaving stories using a deck of playing cards to illustrate their narratives in funny and surprising ways.

While not necessarily magic, these demonstrations, when performed by an engaging and interesting performer, can be very magical.

In this collection, you’ll meet five performers each with their own individual take on this longstanding card magic tradition.

Up first is David Regal who weaves a tale about a visit to a night spot of questionable repute. Michael Ammar then performs and explains Eric Mead’s great story deck routine, notable for the impression that it leaves on the audience that the story the cards tell is being improvised on the spot by the performer. Bill Malone is next with his signature version of Sam the Bellhop, who also shares every single false cut, false shuffle and flourish used in the routine – the elements that make his routine such a modern-day classic – all in minute detail. The tale of Sam the Bellhop is then revisited in very hilarious fashion by Doc Eason, who keeps the audience on edge by making them think the routine has gone spectacularly wrong but naturally brings it to a smashing conclusion. Finally, Eugene Burger charms his way through the classic Diamond Jack routine, suitable for close-up or platform, and then shares some great tips on memorizing and performing a story deck routine that can be implemented no matter which version you choose to learn.

If you (or your audiences) are tired of the standard “pick a card – any card…” approach, adding one of these classic story deck tricks to your repertoire will add a great deal of texture to your performances. And, what’s more, audiences seem to love them…and what more can you ask from a card trick? 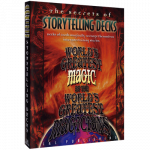