A ‘MAGICAL’ AUTOBIOGRAPHY AND AN INSPIRATIONAL BOOK! 1+ Million people have seen him live in 165+ countries

Known as the German with a South African accent

Can you believe it! A non US, UK, or Europe magician that achieved fame and fortune, travelled the world, became a TV star in his own country and achieved all his dreams! A magical inspirational real-life story like never before!

Magician, Professional Speaker, Author, Global Adventurer and Cruise Director, Wolfgang Riebe shares his life story from growing up in humble beginnings in a third-world country with limited opportunities to making the word his playground.

Not only will magicians and speakers find it fascinating, but the public will also be inspired by a story of a man that dared to believe in himself and created ‘real’ magic in the world. It is a story of hope, self belief and passion where life threw curveballs along the journey, yet against all odds Wolfgang achieved his dreams and so much more, inspiring millions of people along the way!

This book is as real as it gets! From writing about his youth and parents in Germany and the effects of WW2, to growing up in South Africa and returning to Europe to seek fame and fortune. Life at sea on the cruise liners to becoming a global corporate events speaker/entertainer and TV celebrity for many years.

Why the weird title? Smoke & Mirrors refers to magic. Braaivleis is the South African word for barbecue! Sauerkraut, he’s German!

Real people, family values, magic, turning negative into positive and so much more! This book is a roller-coaster of emotions and experiences. Sharing the initial draft copy with a few select colleagues, reviews have included: “He’s been to more places than most airline pilots!” and “They should make a motion picture about your life!”

“Living your Dream… That’s Wolfgang in a nutshell! A man who stopped at nothing and nothing stopped him achieving success. A friend and mentor to so many South African people and indeed others around the world, he has inspired so many. He has also travelled more than the average airline pilot entertaining people along the way. The extracts I’ve read so far will truly be an inspiration to anyone who wants to live “their dream.” Thanks for the friendship over the years and to your wonderful family 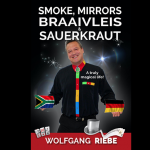