Magic with playing cards has always held a deep fascination for performers and audiences alike, most likely due to the almost infinite variety of effects that are possible with them. Everything from sleight of hand to topological tricks are all potentially a part of the magician’s arsenal and somewhere in this broad spectrum are card effects that almost work by themselves.

On this DOWNLOAD, you’ll see a number of powerful card tricks that rely not on knuckle-busting manipulation but rather, on mathematical principles, stacks, and subtleties, aided in some cases by very minimal, basic sleight of hand.

Harry Lorayne starts things off with his take on a classic Al Koran effect where the spectator chooses his own card, mixes it into the deck, and yet the magician is able to find it despite paying no attention to the earlier procedures.

Allan Ackerman is next with a wonderful and expanded version of a great Karl Fulves trick while Daryl enlists the aid of one of the Queens in whispering the name of a spectator’s selected card into his ear.

David Regal proves he knows the name of an audience member’s lucky card by producing a duplicate of it from his wallet while Michael Ammar offers his version of a Paul Harris self-working classic.

Johnny Thompson confounds with a trick that is simple in procedure but high in impact and Bill Malone presents a version of the 21-Card Trick that will fool anyone who thinks they know it.

Daryl returns, turning a basic force into a major effect, while finally, Eugene Burger uses a simple strategy to demonstrate how a deck of cards has an uncanny ability to locate cards by itself simply by spelling to them.

While there’s really no such thing as a self-working card trick – you still need to learn the procedures and rehearse an interesting presentation – it remains that a simple trick without the use of sleight of hand can be a deadly weapon when slipped into a card magic set.

These kinds of effects can add texture to a magic performance and with the tricks you’ll learn on this DOWNLOAD, even if sleight-of-hand really isn’t your thing, you’ll always be ready to amaze and amuse when someone slides a deck of cards over to you and says, “Show me something…” 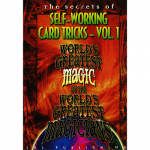