Reverse Routine it is a routine which contains 2 rapid reverse effects. Really fast methods to turn your cards face up, or even an all deck while your cards stay the same.

Deck Reverse
You put the cards back (spectator’s card and 2 Jokers) in the deck and this time the whole deck reverses while the 2 jokers and spectator’s card stay the same. 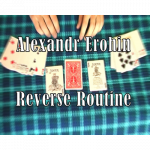