Plunge Of Death by Kochov– Mentalism routines done in character.

Plunge Of Death by Kochov

For the first time ever, the mullet-haired maestro reveals some of the mentalist routines that have helped make him a house-hold name in his former Eastern-block homeland.

This video features his heart-stopping ‘Plunge of Death’ routine, as well as a special bonus – performance and explanation of his reputation-making 4 gun finale, ‘Real Live Russian Roulette’.

Not only will you be stunned by Jasper’s fantastic performance as the outrageous Kockov, you will also be very pleased to know that these practical, professional routines will fit straight into any magic or mentalism show, regardless of your style of presentation. His brand of creativity features low-tech methods and high-impact effects, allowing the performer to do his job: entertain a paying audience.

The man, the magic, the mullet – Kockov !

WARNING: Not suitable for anyone under 18 years of age. 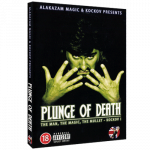