No one saw him coming…

In 1994, England’s Steve Bedwell made the trip to Orlando, Florida to compete in the Close-Up competition. When the dust settled, not only had Steve won First Place, but his act was so highly regarded that the judges awarded him the coveted Gold Cups, an honor bestowed on only a very select few in the history of magic.

Parked Card! – A signed selection magically travels from the deck to the top of the card case – right under the audience’s nose – TWICE! The third time the selection ends up folded inside the card case! Unbelievable! 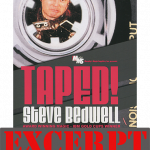