With Origin, I’ve compiled the vast majority of my signature work (including exclusive work unavailable anywhere else) in magic and mentalism, a multitude of effects and essays over 280 pages. 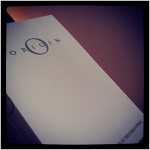