More Banding Around by Russell Leeds

Russell Leeds is back with ‘More Banding Around’! A follow up to his original best seller, ‘Banding Around’ this shows you how to incorporate simple props into your rubber band magic and take it to the next level using new concepts and amazing new routines.

THREE: Three bands are produced one at a time and then vanish completely!

LEGACY: The classic two in the hand and one in the pocket routine with a great kicker ending.

STUCK: A signed sticker jumps from band to band, vanishes and re-appears in the card case.

DIFFUSE: An incredible penetration of a band through a pen.

FLAME: A band turns into a match which then causes a whole box of matches to change into bands!

IMAGINE: An incredible bare handed productions of a rubber band.

TORN: A band is snapped and then visually restored.

GENESIS: 2:24: Two bands fuse into one. The band then passes through your hand before it is split back into two whole bands again. 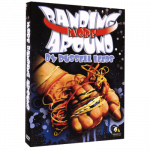