Richard Osterlind has long been considered one of mentalism and magic’s most creative minds.

In this exciting new video series, he shares with you not only his most famous creations but also many highly guarded secrets, ideas and routines, many of which are right out of his professional act.

In this volume of Richard Osterlind’s landmark video series, he shares perhaps his greatest contribution to magic and mentalism – the Breakthrough Card System, considered by many to be the most ingenious playing card stack ever devised.

The spectators could look at the cards for hours and never discover its devilish secret and, for the first time, Richard Osterlind, along with host Jim Sisti, shares twenty years of effects, performance tips, ideas and shortcuts with his inspired creation. 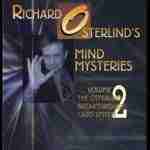