Joshua Jay is truly a phenomenon in magic – host of the Talk About Tricks section of MAGIC Magazine for the last seven years, author of two best-selling trade books (the first published in five languages), star of a series of instructional magic DVDs, Champion at the World Magic Seminar in 1998, TV appearances in no less than eight countries – the list goes on and on…

But for many in the magic community, Joshua Jay’s most interesting performance venue is his LECTURE! Over the past three years this New York based (and Ohio raised) worker has toured FIFTY-FOUR countries, allowing him to hone his lecture into one of the most entertaining and informative programs of its kind. In November 2007 Joshua performed this lecture in Lima, Peru. It subsequently won Joshua “International Magician of the Year” from the Association of Latin American Magicians. On this video Joshua brings this polished event to the UK for the first time.

At the heart of this two-hour extravaganza is – METHOD. Joshua Jay dissects and examines the numerous methodological approaches you can apply to your magic. And, of course, each approach is demonstrated with a different, original routine. This is a collection of powerful, workable magic, but more importantly, an examination of the thought process of their construction.

Whether your interests run to cards, coins, close-up, parlour, stage, mentalism or walkaround – Joshua Jay’s lecture will simply MAKE YOUR MAGIC BETTER! Methods In Magic also features an in-depth interview with Joshua Jay, taking in advise on practicing, crazy celebrity encounters, advise for aspiring magicians and some hair raising tales from life on the road.

HEIGHTENED SENSES – a brilliant (and EASY) piece of mentalism that plays for crowds big and small.

A.C.A.A.P.N – A selected card appears at a named page number in a closed book.

DISCRETE DISPLACEMENT – it’s a force, a control, a switch and MORE!

SPLIT DECISION -Even though two spectators misremember the same card, you find “both” cards and create a most impossible object.

BACK IN TIME -An in-the-hands Triumph routine that defies the laws of time.

I DREAM OF MINDREADING – A card location wrapped in a touching story about doing magic for a blind man.

TOTALLY TRIUMPH -A flourishy way of straightening out a pack of cards…and producing the four Aces.

Please Note – Some of the routines featured on this video require the use of special gimmicks available separately.

“Josh Jay rocks! Great magic, and I loved the intimate insight into the behind the scenes shots while touring with Josh. It feels like watching a real world documentary on topics magicians care about!”

“You will see Joshua at his very best! A clever, likable, and entertaining magician. The tricks are good but the lessons he teaches are even better.”

“In an overflowing sea of magical videos, this one stands high above the rest because of its tremendous value, its excellent content and it’s just plain fun to watch!”

“I’m very impressed. The tricks and explanations are good, but this video shows the off-camera side of Joshua that has not been captured on video before. Better than going to a lecture; it’s like spending a couple of days with him. Bravo.”

“Between Owen’s hip/crisp production quality and Joshua Jay’s absolutely brilliant material…this is one hellava video. Get it before I buy all the copies in stock!”

“I hope this will set an example to everyone producing videos of what they should be like- strong production, strong content, well thought out, and giving tremendous bang for the buck.”

“Joshua Jay is one of the very best magicians of his generation and this video underlines why… along with why he really shouldn’t attempt the English accent!”

“I thoroughly enjoyed the video– every bit as entertaining as the original Lecture!”

“This is a great opportunity to see one of the world’s best magic lecturers strut his stuff. Joshua took the UK by storm and luckily, Big Blind Media were there to film the repercussions! “

“Great material performed by one of the brightest young talents in the world today. Another top notch production from the BBM team.”

“I personally thought that the first effect, I Dream Of Mind Reading, was worth the price of the video and yet it had only just started!”

“By developing into such a relaxed onscreen personality, Joshua lulls us into easy listening… and easy learning!”

“This in no ordinary Magic Video. Of course, it does contain terrific routines that are fully explained to you. But it is so much more than that.”

“Just got the video and LOVE IT!”

“This new video stands out a mile – a great way to learn magic, and not only the method, but magic as a whole. The combination of devastating magic, slick production and information is worth its weight in gold, and means that this video leaves other lecture videos in the shade.”

“The new Joshua Jay video is filled with excellent magic taught by one of the premier magicians of our time. A question and answer segment allows Joshua to share some tips and stories that will enlighten and inspire you. If you are looking to add some hard-hitting practical magic to your repertoire, look no further than this well produced and shot video.” 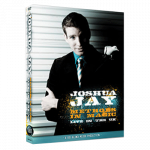