Metal by Dee Christopher and Titanas

Teaching the guarded methodology and technique behind his highly visual and impactful metal bending routines, Christopher covers all the ins and outs to take you from a beginner to a pro – seasoned metal benders will also find new techniques and tricks to apply to create maximum damage with minimal pocket space.

The effects taught are as follows:

Quicksilver – Two spoons are shown, the first one is VISUALLY twisted out in the open (DC neck Twist), the second melts into a perfect arch in three phases, involving the spectators throughout!

This is Dee’s working routine that he’s performed thousands of times in the last year alone all over the world. Only two spoons are required and the reset is INSTANT.

HDFCK – An examined spoon warps and distorts as the spectator holds the bowl and the performer slowly runs his fingers down the neck. Phenomenally visual and HAS TO BE FELT TO BE BELIEVED.

You’ve never seen spoon bending like this before, after countless requests for release, it now features on this triple feature video.

With this great visual and sneaky technique you will always gauge a positive response from your spectator when the coin bends in their hand with no chance of a psyche-fail!

Clocking in at over an hour’s worth of performances and tuition, DC and Titanas have also included a BONUS: Two versions of the highly acclaimed LOKI from Dee’s book Pieces at 3AM.

Loki – A spectator takes three different coloured poker chips and hides one in each pocket. The performer not only reveals which pocket each resides in, he also can tell them which order they were taken in!

No electronics, no gimmicks, no peeking, this is a perfectly simplistic demonstration of mind reading, or precognition. two versions are taught, one of which allows you to openly place a prediction which can not fail on the table before you begin!

Get your copy of this highly anticipated release from one of the top new talents in psychokinesis. 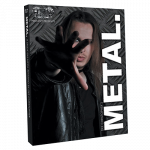