Hen Fetsch invented the board in 1954, and over the past five decades it has undergone many different variations, however most magicians and mentalists still own an original Hen Fetsch board. This book covers routines for the standard Mental Epic prop and its modern variations, as well as One-Ahead routines that can be performed close-up and impromptu using sticky notes, business cards and index cards – all without the board.

“I just received my copy of the “Mental Epic Compendium”. I’ll keep this short and sweet… Wow! What a collection of great routines and ideas. This is an impressive book that will be a great addition to anyone’s library, especially those who have an interest in the One Ahead Principal and/or Mental Epic type routines. There is a TON of very useful and practical information contained within. Everything from close up, impromptu, to stand up and stage, along with other information of interest. Don’t miss out – you won’t regret it!” 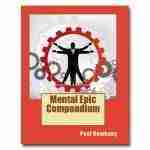