It’s done under what can be the most difficult conditions: performing for a medium – sized audience with no formal stage setting to focus attention. Sightlines are often poor, and people must be drawn into the experience even if they can’t see everything clearly. Too, you may be working surrounded, so you’d better be sure there are no angle problems. And, as it’s likely to be a social occasion filled with potential distractions, your material needs to be compelling from the very first moment: intriguing presentations that build to powerful conclusions. This video features a range of commercial Parlor Mentalism. No pre-show work, no secret assistance; this is practical material for the solo performer, using subtle and unusual methods that are as fascinating as the effects they produce. You’ll learn: 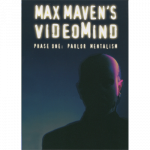