Welcome to the wonderful card magic of Ed Marlo!

Ed Marlo, the genius of construction, and the incomparable Bill Malone, the brilliant performer, come together in this landmark anthology, as Bill performs and explains some of Marlo’s finest contributions to card magic, compiled by Bill from Ed’s writings and their personal sessions!

Join Bill as he guides you step by step through what will undoubtedly become the greatest and best collection of Marlo material…ever. “I’m very excited about this project and I’m sure Ed would have been as well!”

Finding My Assistants – Spectator finds the four Queens just by cutting the deck.

Spectator Cuts the Aces II and More – The spectator finds the four Aces! A few of Marlo’s many versions are explained.

Think-Touch-Turn – A card reverses itself several times and surprisingly changes to the selection! Bill’s great presentation for this classic!

Instant Mental Sandwich – A mentally-selected card appears sandwiched between two cards that were placed on the table before the trick even begins! Featuring Marlo’s Visual Retention Switch.

The Deal Switch – Same as the above with an entirely new method! Marlo loved this and performed it many times!

Gambler Outdone – A quick version that tells a story about who’s better with a deck of cards, a gambler or a magician!

A Sixy Trick – An entertaining card trick with a flurry of magic effects!

A Comedy Classic! – Everybody picked the same card-or so they think! A routine you will love to perform!

Eveready Black Routine – An impossible control for those late-night sessions with the boys!

Open Air Assembly – A version of Open Travelers using just the four Aces and nothing more!

Eight-Card Oil and Water – Black and red cards magically separate every time until the magician causes them to magically mix! Bill’s routine using Marlo ideas from throughout the literature. 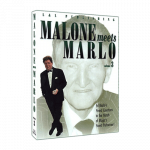