THE WORLD’S GREATEST FEET OF MAGIC 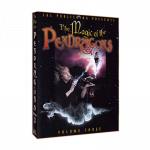