Larry Jennings was one of the greatest sleight-of-hand artists who ever lived.

Over the course of his 64 years, he developed many classic plots in card and coin magic. Lots of Larry’s magic has been described in books, videotapes, and DVDs. But, the books often failed to capture the nuances in his work, and he was usually nervous during the shooting of the formal videos and DVDs.

During the early 1970s, Larry left his home in Los Angeles-where he had moved to study with Dai Vernon-and relocated to Lake Tahoe, California, to open his own plumbing business. There he met Louis Falanga, who became Larry’s student and friend. One day in Louis’ living room, Larry allowed himself to be videotaped describing 12 of his favorite routines: 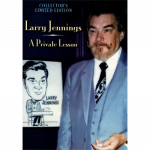