The magician now opens up a blue deck of cards and take them out of the box. They have been on the table all the time. The spectator now counts down to the number 25 in this case.

The card they are thinking about are at the right number number in the blue deck.
You can name the card before turning it over.
In this version by Lars La Ville , the spectator can think of any card.
You also know which card the spectator are thinking of.

Bonus effects by Lars La Ville:
You can go from Dai Vernon Poker Routine into Stealth 2.0 also.
You ask if there were 5 players in a game of poker, in which position the spectator wanna sit.
You now deal the winning hand – a royal straight flush to the spectator.
Now you say you wanna repeat this. But this time you deal a bad hand to the spectator.
Then you say, ok lets try something else with your hand, and now can perform Stealth 2.0

Setup, bonus routine by Lars La Ville:
This effect is inspired from John Carey’s routine – Stealth. This is just my variation and I changed it, so you in this version, the spectator can think of any card in the hand, and you can name the card before it’s turned over in the blue deck.
Original released October 2020 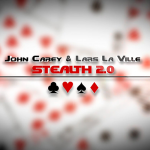