INSANEwave is Dee Christopher’s evolution of the BrainWave effect. The classic effect is that a named card is the only card in the deck with a different coloured or contrasting back design.

I wanted to take the effect further, I loved the image of spreading a deck and having multiple cards with different backs, I began work on forging a solution with several thoughts in mind.

This is the effect and solution that I came up with. The basic effect is as follows:

A spectator is handed a deck of ESP cards and shown the 5 sets of 5 symbols. They are asked to shuffle and just name one symbol. Let’s say they named a circle.

The performer then spreads the deck across the table or in his hands face down. 5 cards are seen to have red backs in the blue deck. These are revealed to be the 5 circle cards.

Dee Also details how to create a living/dead style effect using this method and talks about doing this with playing cards also.

In this 13 page PDF with photos throughout, Dee explains his method to achieve this effect in full. (No BrainWave deck required. Use your own deck.)

Don’t miss out on this very deceptive and insanely powerful effect. Step your act up a notch with INSANEwave. 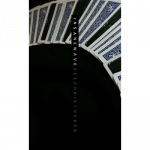