Contained within the pages of this eBook are 127 information packed pages of Pure Gold that will enable you to duplicate all of the most amazing and hilarious feats of the Comedy Stage Hypnotists & Street Hypnotism Experts without ever needing to place anyone into any genuine Hypnotic Trance States at any time and in a manner 100% Guaranteed to work without fail.

You are also given links & QR codes taking you to a total of ten step by step training videos with a combined duration of just over 10 hours & 30 minutes.

By watching these videos not only will you see most everything that is taught within this ebook demonstrated on real people, but also you will be taught NUMEROUS other feature stunts, routines and tricks that it would be next to impossible to describe and explain properly in print and truly need to be studied by watching Royle perform them and then teach them to you in his own inimitable style.

Indeed the Secrets, Tricks and Techniques taught here will also prove invaluable study to Hypnotists of all kinds as they can easily be used by both Hypnotherapists & Hypnotic Entertainers to give quick public demonstrations of their skills in a manner which is guaranteed to work each and every time when you follow our instructions to the letter.

A Grand total of Twenty-Two Mind Control Style Stunts and Feature Routines are taught in a simple step by step manner along with several Key Psychological and Linguistic Principles which can be used in so many ways it truly does enable you to duplicate all of the things you may ever have seen a Hypnotist get people to do on Stage or on the Street.

Whilst the subject of “Instant Stooging” is covered within these pages, it is taught in a manner whereby the “Instant Stooge” will actually come to believe that they were genuinely Hypnotized and as such whatever they say to the audience after their involvement in your show will only make both the volunteer and also the audience believe that you are indeed the real deal even more.

Using some of the Key Principles taught you will be able to confidently and competently instantly stick peoples hands to walls, their feet to the floor, make them forget their name and be unable to say it out loud plus a whole host of other entertaining stunts that will cement your reputation as a true master of Mind Control.

And yes along the way you will also learn how to use these guaranteed to work techniques as leverage to actually rapidly and easily get people to go into genuine Hypnotic Trance States.

Whether a complete novice or an experienced professional there are methods inside this book that you will instantly want to add to your working repertoire and use on a regular basis.

Indeed some of the things taught on the videos (and in the ebook) which you are given access to are so visually impressive that they have been used on Television and Stage Shows by the Likes of Derren Brown & other famous names.

Some of the other “Hypno-Tricks” taught in the videos (and text) have also been used in Episodes of the British Channel Four Television Show “Rajan & The Evil Hypnotists” to great effect and on other TV shows around the world including “The Next Uri Geller”.

This is the real deal, the true insider Secrets of Pseudo Hypnosis & Hypno-Tricks taught to you by “The British Bad Boy of Hypnosis” Jonathan Royle who at time of this books release in Paperback (Nov 2022) has been a Professional Comedy Stage Hypnotist, Mind Magician and Mentalist performing around the world and on Television Shows Galore for over three decades.

There is more than enough material taught within this book and the supporting videos to present a complete close-up, parlour or indeed even grand stage performance of your apparent Mind Control and Hypnosis Skills making this one of the best investments you will ever make. 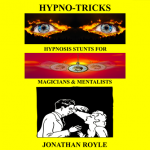