The most INSANELY VISUAL penetration of a signed card through a sealed bottle is now released on it’s own.

A deck of cards is introduced and a card is selected and signed across it’s face. This is then replaced back into the deck and the deck is shuffled by the spectator. The magician then takes two rubber bands from his pocket and asks the spectator to wrap them around the deck so he can do anything sneaky with misdirection.

Inside the bottle the signed selection is immediately seen swirling around, the bottle still being sealed, of course!

Glastion really is that visual! This has to be the most amazing way to perform this effect, just how Nefesch’s brain managed to spew this out for us all to enjoy is a mystery in itself! 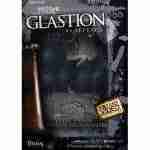