Should a mentalist use playing cards?

Good question and one which has been raging among mentalists since Annemann was still going strong.

In this book Scott has addressed that question and put together some of his favorite mentalism card routines, covering effects with borrowed decks, stacked decks and gaffed decks.

You’ll find no knuckle busting sleight of hand here; instead Scott has included some of his own routines taken straight from his professional mentalism repertoire, many of which no other magicians have seen until now. Some of the ideas are based on old effects given a new twist, but others are exclusive to Scott and were designed using tried and tested methods.

Welcome to the world of “Forces, Peeks, Stacks and Gaffs – Mentalism with Cards!” 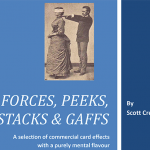