Extreme Magic MakeOver is filled with brand new, funny, original, COMPLETE ROUTINES for some of magic’s most popular and widely performed effects.

Hal Spear and Paul Romhany have put together a book all magicians can use – complete FULL, ORIGINAL patter for the following effects:

Snowstorm in China – two different routines that are original

Half-Dyed Hank – three original routines (note: these routines are for white/red hankies and different than the black/red in CSI:The Case of the Half-Died Hanky)

Professors Nightmare – two versions including an adult version for the comedy club performer.

“Hal “Chickie” Spear is one of the most respected Comedy Writers in the Business, and a knowledgeable Magician as well. This book is more than a “Makeover” , it’s more like a” Comedy Collagen Injection from a Comedic Cosmetic Surgeon. ” Like a Playtex Living Bra, Hal “Lifts & Separates” these tricks with his Comedy so that they become “Standouts with Hard Little Nipples” ….in a word…Succulent !”

“If you’re looking for a way to give your act a face-lift without doing all the heavy lifting yourself, then it’s time to take a nice big swig of Hal Spear’s Comedy Elixir. Guaranteed to put a smile on your face, and more importantly, your audience’s.” 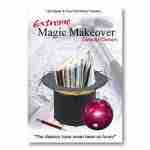