On November 2012 the first European Close-up Magic Symposium brings 20 magicians from all over the world to Milan for 2 days of non-stop close-up magic, with Lectures and Performances. Private sessions and Gala shows. The routines in this issue choices among the best and shot live at the symposium, are very impressive and strong. Expect some knuckle busters as most of the contributors in this issue are some of the best names in the Close-up Magic genre. All routines are complete with performance and explanation. This is the first official published edition, available for download only, one of the best in the history of close-up magic, with the others in the same series.

BEBEL: “Ambition Colore”
One of the greatest of card magic world. The next “Guest of Honor” edition 2013 symposium presents its own unique effect. One of his beautiful version of the ambitious card, which in this case becomes a routine very original and with a surprise ending. Needless to say, and everything is executed with his masterful touch that made him popular in the magic universe. The detailed explanation is another show within the show, with a lot of details and variations on the theme. English explanation

HENRY EVANS: “Three Predictions”
Another beautiful and inexplicable effect with the cards: A prediction with a bet using two banknotes. A game seemingly impossible but a very easy. The presentation of Evans is very engaging, and it’s a real lesson on how to deal with the public. Versatile game is suitable for close-ups and stage. English

HERNAN MACCAGNO: “Maccagno Box”
A routine really unexplainable and invisible even in a situation of tight close-up. The principle is old but the realization of the routine is ingenious and the effect is extraordinarily magical. A big compliment to Maccagno for being able to apply an old principle in a new guise, knowing make a classic routine much more modern and magical. All magicians was deceived. Average difficulty and affordable for everyone. Spanish

ROBERTO GIOBBI: “Cups and ball opener”
One of the Roberto’s favorite routine in his professional repertoire. His version, simple but powerful, is tested over many years in his experience working with different types of audiences. Giobbi is the master of teaching for magicians and even in this case its presentation and detailed explanation, with historic notations, make it an example of how to teach magic to other magicians. Taken from his lecture live at the symposium. English

FLIP HALLEMA: “Wand routine”
This is the magic act that made him famous in the magic world. This extraordinary and famous routine shows the technical skill and artistic mind of its original routine. Flip in this case is a step forward, and his ability in the sleeving is impressive and his ideas overwhelming. In this clip, taken from his lecture at the symposium live, also explains his famous “Flip move”, used by most magicians all over the world. English

AXEL HECKLAU: “Flee of the phoenix”
A beautiful routine of creative magician German. A transposition of a signed card directly into the hands of a spectator! The effect is magical and amazing and the card can be given as a “souvenir” to the spectator! Ingenious solution in a routine impressive but easy to perform, and full of magical meaning. English

JEAN EMMANUEL FRANZIS: “Cup and coins”
The best french coinman gives us a beautiful and original routine. Apparently a mix of “wild coins” and “cylinder & coins”. The result is great: a routine in which are involved numerous coins, including appearances, disappearances and transpositions. All performed live at the symposium, an original interpretation of classical techniques that in his hands actually appear incomprehensible. English

ERIC ROUMESTAN: “Cards and Pen”
The french magician shows us another of his beautiful interpretation, and a new unique and ingenious application of the topit. In this case, the objects literally disappear from his hands, and the effect can be presented both in situations of extreme close-up as well as in stage. His topit is really a bomb… it does not need a jacket… only a shirt! English

TRISTAN MORY: “Matrix”
An amazing version of “matrix”, by a famous original french coinman. His style is very artistic and original, and his particular technique has many applications. This Matrix is immediate and fast, but with an economy movements and steps that make it not difficult to do, but at the same time truly magic and inexplicable! Mory arises in modern style and present of coin magic. The coins literally fly from one card to another! English

Bonus ALEX CONRADI: “Competition third place” (Performance only)
The third prize was awarded ex aequo in the international competition of close-up to the symposium. This is entirely his act live and we can admire its beautiful interpretation and presentation. Alex is one of the most popular professional magicians in the dutch magic scene. English

Bonus HERNAN MACCAGNO: “Maccagno Coins box” (live al gala close-up, performance only)
Live performance with different applications comparing to his lecture. Here you can see the versatility of routine Maccagno, without speaking, even in a gala close-up situation, not too close. Musical Act 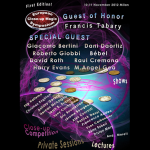