Spectator focuses on a mental image from imaging something on tv.
Spectator draws image on a blank card within a tv screen drawn on the blank card. He/she then signs the back of the card after putting face down.
Card is placed amongst other blank cards and into paper envelope.

Voila, the spectators image is opened and they are the same. 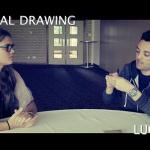