Eddie Fechter’s Magic at the Fork’s Hotel! by Paul A. Lelekis eBook DOWNLOAD

This eBook opens with a short biography of Eddie Fechter’s magical life through the eyes of two people who knew Eddie well. This is an inside look at one of the most gifted magical performers of all time… and one of the greatest dice men!

1) 6-4-5 Coin Trick – This was Eddie Fechter’s most requested trick! A 3-phase coin routine that is not only amazing… but easy to do. Almost sleight-less!

2) PEEKS – Learn the many uses and subtleties of the Peek. This was how Eddie almost always had a card selected! Learn the many ways to exploit these ploys!

3) Eddie’s Dunbury – Miller’s Dunbury Delusion is one of the most lasting effects in the world of card magic. Eddie has two different versions that are completely different, both with hilarious patter! See the very next effect!

4) That’s It! – This is Eddie’s second version of the Dunbury Delusion. It has a completely different “flavor” than Eddie’s Dunbury. Both versions have their own place in certain performances.

5) 2 Card Revelation – This one is a killer! Two selections are made and lost in the deck. Performer cuts the deck but both cards at the face of each packet are wrong! He shakes both hands, turns the palms face up… and there are the two selections! A startling double revelation!

6) I’ve Got a Surprise For You! – A selected card is lost in the deck. Magician cuts to a card… but it’s the wrong card! Magician reaches into his pocket, but it’s the card on the table! When the tabled card is turned over – it is the selection! Eddie’s routine is structured in an unusual way that makes it seem impossible! There are two amazing transpositions that will drive the spectators nuts!

7) Card on Ceiling – “Immortalize” your spectators! Learn one of the finest tricks you will ever perform! Full routine with complete patter and 2 hilarious bits of business by Paul Lelekis that he’s used thousands of times! Great tips, too!

8) A Fechter Force – This excellent and convincing force may only be performed by the more advanced card guys… but few realize it is actually Fechter’s creation! You will find many uses for this superb force.

9) Yankee Doodle – This has been a hidden gem in Eddie’s work! It is not so much a magic trick as it is a fun way to involve everyone in a musical revelation! Kids and adults love this effect!

Be the first to review “Eddie Fechter’s Magic at the Fork’s Hotel! by Paul A. Lelekis eBook DOWNLOAD” Cancel reply 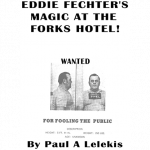 Eddie Fechter’s Magic at the Fork’s Hotel! by Paul A. Lelekis eBook DOWNLOAD
$10.00