Darwin Ortiz Nothing But the Best Set Vol 1 thru 3

Darwin Ortiz is a living legend, and one of the finest creators of card effects living today.

He has released countless books and videos, but what makes “Nothing But the Best” shine brightest is that it’s a BEST-OF collection from ALL his material. Here you will find a treasure-trove of effects that span his whole career. This is the best of the best, and he performs the effects for a very warm and excitable crowd, which makes the show portion of each DVD even more exciting to watch.

You will see modern classics like “The Dream Card” in which an odd-backed card you dreamed about BECOMES a signed selection. You’ll also see Darwin’s masterful “9-Card Multiple Selection” in which he finds nine selected cards, each one in a different way.

If you’re a Darwin fan, this is, perhaps, the ultimate collection. If you have never seen Darwin on video, this is the perfect place to start.

Here is what you will see:
Volume 1

The Vegas Shuffle – A progressively more impossible, three-phase gambling routine that even non-card players will enjoy.

The Psychotronic Card – First you perform one of the most astonishing and convincing vanishes ever of a selected card. Then the card is found in the spectator’s own hands!

Four To One – One card becomes four; four cards become one. One of the strongest transpositions in card magic, and it happens under the spectator’s hand!

The Unholy Three – It starts as an amazing three-card location and it ends with one of the most powerful surprise kickers in card magic.

Museum Piece – A true work of art-magically, aesthetically, and presentationally.

Test Your Luck – An impossible coincidence, and the spectator does it all.

Best Of The Best (performance only) – A tour-de-force demonstration of incredible gambling skills, both physical and mental.

Theory – One of magic’s greatest thinkers offers his insights on three of the most important subjects in magic: The Magical Experience, The Audience is Not the Enemy, and Meaning.

Beyond Collecting – Most versions of this plot are marred by overhandling. In this direct version, the Aces simply materialize. A moment later, the selections materialize between them.

Passing Through – Marlo’s Push-Through Failure is taken to new heights to produce a novel demonstration of impossible skill.

Hard Target – The traditional sandwich plot is transformed into a display of uncanny skill. Two selected cards are located under the most impossible conditions.

The Marker – This is considered by many to be the best presentation ever devised for the Torn and Restored Card. It’s meaningful, motivated, and memorable.

Theory – One of magic’s greatest thinkers offers his insights on three of the most important subjects in magic: Conviction and Conditions, Causality, and The Critical Interval.

Jumping Gemini – This modern classic is widely regarded as one of the greatest packet tricks ever created-and it uses only four cards from an ordinary deck.

The Lucky Deck – You start with a blank deck, you end with an ordinary, examinable deck and in between, you have great, entertaining audience by-play.

Modern Jazz Aces – Considered by many to be the definitive version of Peter Kane’s classic effect.

The Dream Card – Not just a Card-to-Wallet, this is a surreal experience the spectator will never forget.

Darwin’s Three-Card Monte – Darwin’s legendary routining skills are on full display in this authentic version of the famous con.

The Ultimate Card Shark – Darwin considers this the strongest gambling routine he has ever found. You control one card, then four, then twenty, then all fifty-two.

Mexican Poker – A post-graduate course on the classic Ten-Card Poker Deal along with one of the best versions ever from a past-master of this effect.

Theory – One of magic’s greatest thinkers offers his insights on three of the most important subjects in magic: The In-Transit Action, Pacing, and Handling Hecklers. 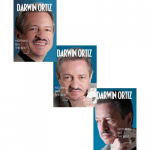