Steve Haynes has tweaked and developed this closely guarded secret for 17 YEARS! Now, it can be yours! The Casanova Concept is an easy to apply principle that will allow you to perform bona-fide miracles with both playing cards and business cards. It’s simple and straightforward, requires the minimum of sleight of hand and will go straight into your repertoire. This is NOT a trick; it’s a principle that can be applied to hundreds of routines.

Featured on this video:

Stroller Controller – A freely selected card is signed front and back, and then lost in the deck. You cleanly reach into your pocket and withdraw their card, showing that you had it BEFORE they even signed it!

Thru & Through – A signed Card Thru Window with a FACE UP, SIGNED selection!

Rip Trip – A signed business card is torn but miraculously restores itself!

Homing On Easy Street – A signed card disappears from the deck and appears in your pocket. TWICE! This is easy-peasy!

As your spectator is still reeling, you offer to repeat the effect. You re-open your wallet (which was empty only moments ago) and slowly withdraw a face-down card. Your spectator’s eyes are popping out of their head – ‘How did that signed selection get back into your wallet’?

It didn’t. It’s the OTHER signed card! The one that should have been in the spectators’ wallet. And when they look in their pocket they find the first signed card! Then they faint!

PRAISE FOR THE CASANOVA CONCEPT:

“Okay, so I want to learn the Casanova Closer NOW! That routine is killer, man! It floored me!” 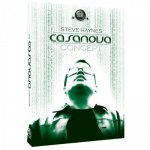