Part 2: A Voyage to the Unreal World

On this tape Eugene is also joined by Jeff McBride to explore his close-up magic that is offbeat, whimsical and decidedly strange. This journey begins with Flash Spirit Message, as efficient a link to the ghostly realm as you could ever ask for. In Double Reverse, a classic Walter Gibson effect that’s been raised from a card trick into an evocative piece of intimate Spirit Theater (which includes Eugene’s personal handling on Glorpy). Eugene’s version of Al Baker’s The Card in the Hat leads into a detailed discussion of advanced thread technique. Jeff then shows what happens when Mark Twain meets Robert Neale, as he performs and explains The Five Gifts of Life. A darker humor is on display when Eugene teaches Phil Goldstein’s The Wagers of Sin. And finally, there’s a thorough analysis of Matt Schulien’s superb Corner in the Glass.

And there’s much more, because Eugene also offers special insights into presentational framing, rehearsal techniques, and the concepts and theories that transform magic into something significant. 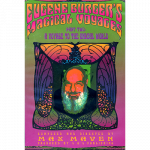