This e-book is a fun-filled, hilarious 12-15 minute
routine, that one can perform with a borrowed deck!

This routine is composed of four monster routines,
spliced together into a very funny event, that crescendos into
Mr. Hamman’s most prized effect, “The Signed Card”. But
THIS version has been brought into the 21st Century!

Now, when someone hands you a deck of cards, and says
“Do a trick!” you will now be equipped with a 4-part routine
that FULLY engages your spectators and will crescendo into a
truly mind-blowing finale – and it’s IMROMPTU!

The four Aces are removed and displayed and then placed
on the table.

Next a card is selected and signed on the face…it is
placed with the four Aces.

The performer then makes the signed card, vanish, leaving
only the four Aces…you guessed it…the signed card is found
to be the Paradox Card that has been on the table BEFORE
this effect even began! WOW!

This effect will make the hair stand up on the back of the
necks of your spectators! PLEASE just try it out!

In addition, purchasers of the e-book will receive videos
and pictures of many sleights, switches, and other very useful
accouterments for your performing arsenal.

This is an amazing bargain for ANY magician! 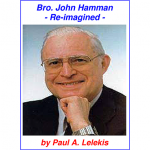