Beyond Fundamentals by Bob Cassidy

Bob Cassidy, who’s act has been described as one of the most perfect in mentalism, has created a brand new, complete act he’ll reveal to you within “The Act: Beyond Fundamentals”

“The Act” will serve as a focal point for Bob to discuss more of his invaluable fundamentals of mentalism. Each effect will illustrate one or more points necessary to achieve a successful performance.

In this recording and lecture notes of his sold-out tele-event Bob reveals:

The Scorpio Variations – This is one of Cassidy’s pet secrets which he’s sharing for the first time during a teleseminar and features material which has been out of print.

The Tossed Out Deck – The hows and why of this mentalism standard along with Bob’s wonderful touches!

Achieving Thematic Unity – One of the most important concepts in building one’s act!

Powerful Closers and Standing Ovations – These are some of the most important secrets to having your act become unforgettable!

Probe and Push – This is Cassidy’s sure-fire technique that he uses to implant specific thoughts in a spectator’s mind.

Beyond the “Almost Real Prediction” – A new approach to Jack London’s classic routine and the “eliminate one” principle! 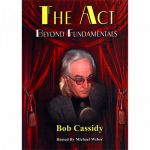