Alex Elmsley is, quite simply, one of the all-time great close-up creators. And the Tahoe Sessions is, as you would expect, one of the great video collections ever recorded. We’re so happy that, in 1998, Louis Falanga captured Alex Elmsley on tape. Elmsley IS worthy of the hype, and then some. He is older here, yet the magic he performs looks FLAWLESS, and he exudes the energy and wisdom of the legend he clearly was. These four downloads are essential viewing for the close-up student, and anyone unfamiliar with the genius of Alex Elmsley stands to be fooled badly by his principles.

The sheer wealth of extraordinary card tricks on these four volumes makes it a great value. On all four volumes you will see tricks that were groundbreaking in their own time and continue to spawn variations today: “Between Your Palms,” “Diamond Cut Diamond,” “Dazzle,” and a dissertation on all the early Elmsley count material.

Does Elmsley still have chops? Yes! Just watch his insanely clean (and difficult) rear-palm card to wallet, or his fan steal. He was such a gifted technician and creator. And although he isn’t a strong force of personality, his charm and wit come through well.

Watch for his Cups and Balls. Whether or not you use his method, you’ll love the ingenuity that went into his bizarre final load, in which he pours TONS of loose salt from all the cups. Also watch for “Dazzle,” an early and perhaps BEST PACKET TRICK OF ALL TIME. And for the best two-deck effect ever invented, look no further than “The Red and the Blue.” 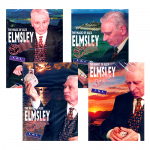