Alex Elmsley is unquestionably one of close-up magic’s modern masters. You probably know him from the Elmsley Count. He has long been recognized as one of the Twentieth Century’s most brilliant innovators of card and close-up magic. This is magic of the highest caliber from one of the greatest minds in close-up conjuring. 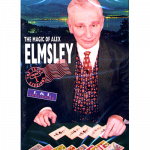